Emotions are intuitively understood by both filmmakers and musical composers, and are therefore very useful as terms to denote a specific atmosphere, tone or evolution. References to emotional states have mainly proved useful in a preproduction stage, as the filmmakers find it difficult to translate them directly to specific filmic or stylistic choices. On the other hand, for composers it is easy to connect emotions to decisions regarding orchestration, genre, melody and rhythm. 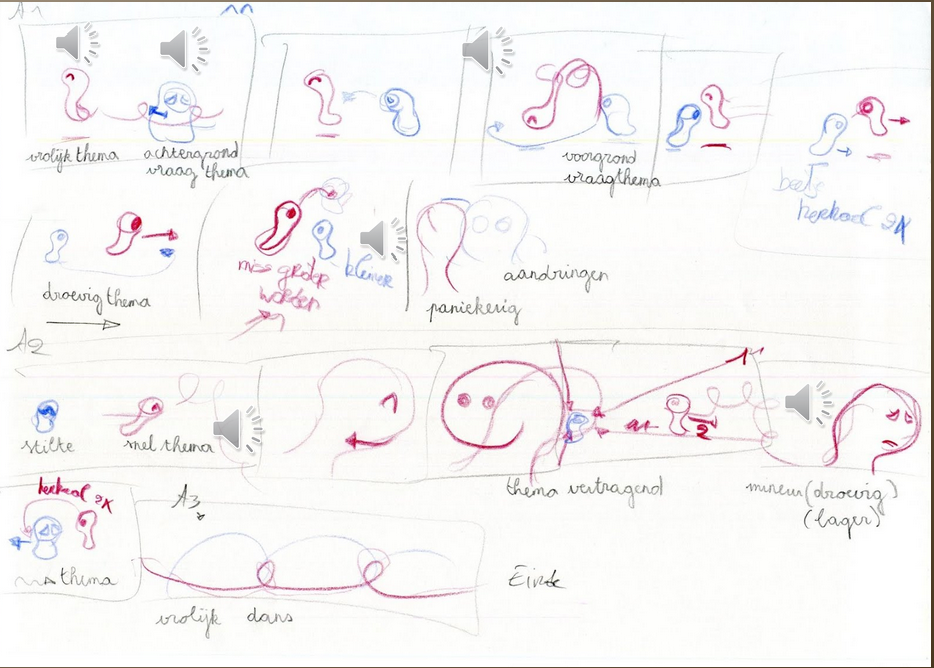 Example of a storyscore that has explicit references to emotions. Already in a conceptual stage this film was described in terms of a transition in the emotional states of two characters, evolving from upbeat (Dutch: ‘vrolijk’), over sad (Dutch: ‘droevig’), to panicky (Dutch: ‘paniekerig’), and then back to upbeat.

Filmmaker: Melanie Kellens The thumbnail sketches show that the fillmaker was mainly able to associate facial expressions and general indications regarding shape (small vs. big), movement (approaching vs. avoidance) and pace (fast vs. slow) with different descriptions of emotion. Note that not only words but also symbols (emoticons) and abstract visualisations are used to denote emotions.
Music composer: Anouck Vaassen The composer was able to attach many sound snippets to the thumbnails (as demonstrated by the speaker icons, which could be clicked in the digital storyscore). Some of these were references to existing music, whereas others were ideas for own compositions. This indicates that terms denoting emotion can trigger a lot of ideas and carry a lot of meaning to musical composers. If we inspect the written annotations the composer has made, we notice, in a similar way, that very specific musical terms can be related to the description of emotional states, such as call-and-response theme (Dutch: ‘vraagthema’), minor scale (Dutch: ‘mineur’) and dance (Dutch: ‘dans’).